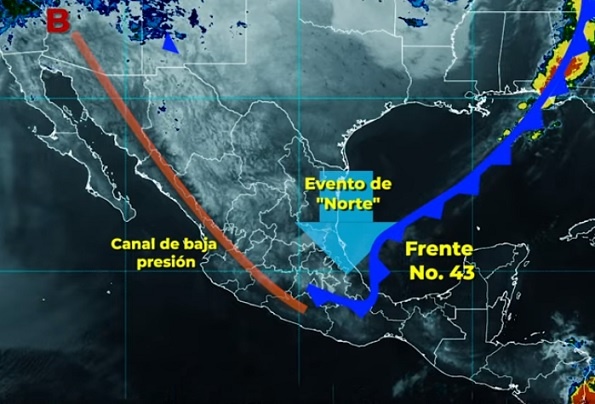 North event with gusts of 80 to 100 km / h, is expected on the southern coast of Veracruz and the Gulf and Isthmus of Tehuantepec.

Oaxaca.- Today, Cold Front Number 43 will travel the east and southeast of the Mexican Republic, causing intense punctual rains (from 75 to 150 millimeters [mm]) in Chiapas, Oaxaca and Veracruz; very strong (50 to 75 mm) in Tabasco; strong (25 to 50 mm) in Campeche, Quintana Roo and Yucatán; intervals of showers (from 5.1 to 25 mm) in Mexico City, State of Mexico, Morelos and Puebla, and isolated rains (from 0.1 to 5 mm) in Guerrero, Michoacán and Tlaxcala. Rainfall could be accompanied by electric shocks and falling hail.

The same cold air mass will cause a slight drop in temperature in the north, northeast and east of the country, for which minimum values ​​of -5 to 0 degrees Celsius are forecast with frosts in the mountains of Chihuahua, Durango, Sonora and Zacatecas, and from 0 to 5 degrees Celsius and possible frosts in the mountains of Aguascalientes, Baja California, Coahuila, State of Mexico, Guanajuato, Hidalgo, the northeast of Jalisco, Nuevo León, Puebla, San Luis Potosí and Tlaxcala.

A high pressure system positioned at medium levels of the atmosphere will maintain the heat wave in the Yucatan Peninsula and the west and south of the national territory, as well as a hot to very hot environment in the center and southeast of the Mexican Republic.

Maximum temperatures of 40 to 45 degrees Celsius are forecast in Campeche, Guerrero, Michoacán and Yucatán, and of 35 to 40 degrees Celsius in Chiapas, Colima, southwestern Mexico State, Jalisco, Morelos, Nayarit, the coast of Oaxaca, the southwest of Puebla, Quintana Roo, Sinaloa and Tabasco.

Due to the persistence of the heat wave and high temperatures, it is recommended that the population remain attentive to the warnings issued by the National Meteorological Service and Civil Protection, as well as state and municipal authorities, in addition to taking preventive measures such as hydration and do not expose yourself to the sun for long periods of time.

For the Baja California Peninsula, a cold environment is forecast at dawn, mild in the afternoon in Baja California, and cool to warm during the day in Baja California Sur. There will be a clear sky and northwest wind at 20-30 km / h, with gusts of up to 50 km / h on the western coast of the region.

The atmospheric conditions in the North Pacific will be very cold at dawn in mountainous areas of Sonora, hot in the afternoon in Sinaloa, clear skies and wind from the west and northwest of 20 to 35 km / h in the region, with gusts of up to 50 km / h in coastal areas.

It is forecast, for the Central Pacific, an environment from cool to cold at dawn in mountainous areas and from hot to very hot during the afternoon, clear skies most of the day, increased clouds in the afternoon, isolated rains in Michoacán, and wind from the west and southwest from 10 to 25 km / h with gusts of 45 km / h.

In the South Pacific, a cool morning environment is expected, from hot to very hot in the afternoon in coastal areas, cloudy evening skies, heavy occasional rains in Chiapas and Oaxaca, and isolated in Guerrero. North event is forecast with gusts of 80 to 100 km / h in the Isthmus of Tehuantepec and high waves of 2 to 3 m in height in the Gulf of Tehuantepec.

The weather conditions in the Yucatan Peninsula will be temperate in the morning, from warm to hot during the day, cloudy skies in the afternoon, heavy rains in the region and a North event with gusts of 50 to 70 km / h. in the Campeche Sound.

In the states that make up the Mesa del Norte, a very cold environment is expected at sunrise in the mountains, hot at sunset, clear skies during the day, and west and southwest winds of 25 to 40 km / h in the region, with gusts of 60 to 70 km / h in Coahuila, Durango, Nuevo León, San Luis Potosí and Zacatecas.

Finally, for the entities of the Central Table, a cold environment is forecast at dawn in the mountain areas, from warm to hot during the day, a clear morning sky, cloudy towards the afternoon, intervals of showers in Morelos and Puebla that could be accompanied by discharges. electricity and hail fall, and isolated rains in Tlaxcala, as well as southwest wind of 15 to 30 km / h in the region, with gusts of up to 50 km / h in rainy areas.