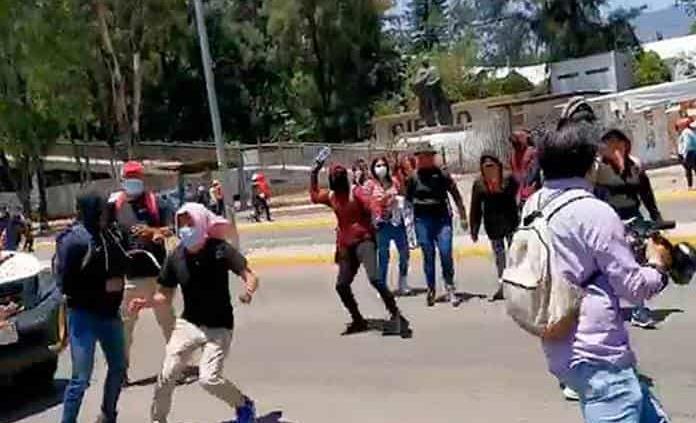 Oaxaca de Juárez.— Associations of journalists from Oaxaca and Veracruz condemned the aggression committed by students from teaching schools against reporters from different media while covering a protest in the ex-offices of the State Institute of Public Education of Oaxaca (IEEPO).

The Association of Journalists of Oaxaca (APO) expressed that the right to freedom of the press and the right to information cannot and should not be undermined by groups of protesters who, in order to demand their rights, disrupt individual guarantees and violate colleagues. and fellow journalists.

Faced with intimidation and aggression by normalista students against members of the journalistic union, he demanded that Governor Alejandro Murat Hinojosa and the President of the Republic, Andrés Manuel López Obrador, provide security for reporters from the state of Oaxaca.

“That the permissibility of acts of vandalism –protected in a so-called struggle for their rights–, is not a guideline so that, on a daily basis, representatives of the Oaxacan press are attacked.

“The APO repudiates the aggression suffered by colleagues on Monday, April 12, and demands the direct and immediate intervention of the corresponding authorities to punish the events and punish those who are responsible for such actions,” he said through a statement. public.

The Association of United Editors and Reporters of the State of Veracruz (AERUEV) also joined the APO’s claim to demand that the rights of freedom of expression and strict respect for freedom of the press contained in the Magna Carta be respected.

As well as preventing groups of protesters from violating “that sacred right contemplated in our Constitution”, people who confuse the social struggle and demands, in this case, young student teachers from Oaxaca, “who clearly become groups of aggression, without any reason whatsoever. and without any respect for the rule of law ”.

Much less, he pointed out, to the journalistic work that seeks to report daily events to society, attached to the veracity and objectivity of the facts,

“With unusual intimidation and violence, this Monday, April 12, groups of protesters attacked the journalistic union that covered the demonstration, so we join the claim of the Association of Journalists of the State of Oaxaca and raise our energetic protest and claims to the state and federal authorities to clarify the facts, define responsibilities and guarantee the safety of the journalists of Oaxaca ”.

According to data from the Human Rights Ombudsman of the People of Oaxaca (DDHPO), a body that also condemned the attack, only from 2015 to April 2021 there are 273 files that have been initiated for attacks on journalists in the entity.

LGBT Caravan marches in Veracruz for International Day Against Homophobia