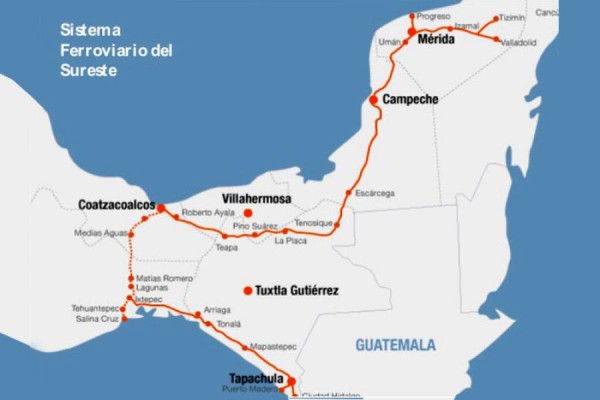 The president assured that the Trans-isthmian Corridor will not be granted to individuals and foreigners as it is a matter of sovereignty that the Mexican State will handle.

The president of Mexico, Andrés Manuel López Obrador (AMLO), reported this Sunday that the works and projects of the Trans-isthmian Corridor will not be concessioned to individuals and, on the contrary, will remain in charge of the Secretary of the Navy.

At the end of his supervision tour at the Tabasco, Veracruz, and Oaxaca refineries, the president posted a message on his social networks in which he informed about his decision.

“It will not be granted to individuals and much less to foreigners, it is a matter of sovereignty, this will be handled by the Mexican State and the Secretariat of the Navy will take care of it,” said AMLO.

The president insisted on his decision to rehabilitate the ports of Salina Cruz and Coatzacoalcos, as well as the railroad, in addition to creating 10 industrial parks in Oaxaca in order to generate jobs and well-being.

He explained that works such as the Transitsmic Corridor, when completed, will be left to government agencies “for the good and for the progress of the country.”

He explained that the investment of the Salina Cruz breakwater will be 4,600 million pesos (mdp), the equivalent of 230 million dollars (USD), and stressed that the resources will come from the government and will not resort to any type of private financing.

He stressed that there is the necessary money for this type of project because there is no corruption in the government “there is the key to everything,” he said.

He recalled that his government is saving and there are no luxuries as, he said, happened in other administrations.

He affirmed that the works that involve the trans-isthmic corridor mean employment, well-being and development for the country “as Benito Juárez dreamed it and Porfirio Díaz made it a reality,” he concluded.

The trans-isthmian project aims to modernize the ports of Salina Cruz (Oaxaca) and Coatzacoalcos (Veracruz) and the recovery of the railroad between both points, of about 300 kilometers, in order to reduce the time of freight transport in relation to the Canal de Panama.

However, these types of works have been rejected by activists and indigenous Mexicans who consider that megaprojects like this invade their territories and damage the environment.