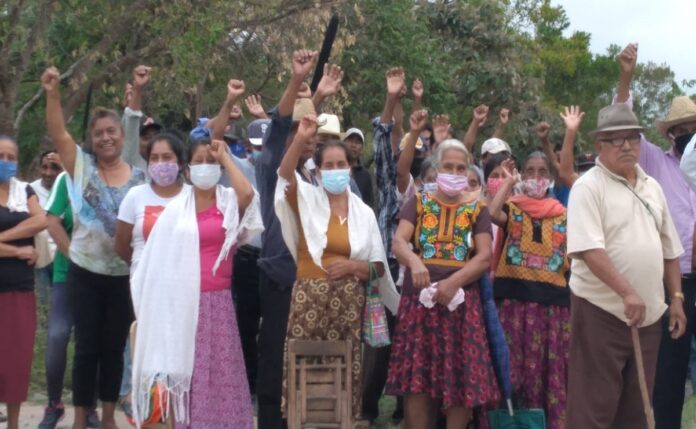 Juchitán.— With the intention of “providing certainty to investors” who decide to settle in the industrial parks that will settle along the Trans-isthmic route, which goes from Salina Cruz, Oaxaca, to Coatzacoalcos, Veracruz, the Interoceanic Corridor of the Isthmus of Tehuantepec (CIIT) decided to promote the purchase of land in communities inhabited by indigenous peoples, instead of renting it out to them or converting the owners of the plots into partners of the businessmen, as requested by President Andrés Manuel López Obrador himself.

This is how Rafael Marín Mollinedo, head of CIIT, explains to EL UNIVERSAL the refusal received by peasants from the Isthmus of Tehuantepec who, during assemblies in the communities, have expressed their intention that their lands should not be taken away from them and instead can become partners of the companies that settle in the so-called Podebis Development Poles, as promised by AMLO in July 2020, in the port of Salina Cruz.

“If it is about ejidos, communal lands, talk to the people, not only buy them but help them to become partners, to be part of the project (…)

“I would like more that they contribute that land. And that the Mexican State, through some legal mechanism, was paying them an income for the benefit of their entire family for a longer time, that they did not have a bitter taste in their mouths that they had already been deprived of their lands, that the benefit was ephemeral. ”, Said the President that day, according to the version of his speech that can be found on the website of the federal government.

Despite this promise, in response to a questionnaire posed by this medium, Marín Mollinedo assures that the decision not to associate the peasants seeks to give certainty to the entrepreneurs that they will be able to work in the long term, but also to the owners of the farms. parcels for which a fair price will be paid, given that the Program for the Integral Development of the Isthmus acts as a mediator of the purchase-sale process carried out by CIIT.

Since the end of March 2019, when the federal government convened through the Ministry of Finance (SHCP) and the National Institute of Indigenous Peoples (INPI) to a series of consultations with inhabitants of native peoples in search of their endorsement to modernize the Trans-isthmian Train began to outline the possibility of installing 10 industrial parks in this 300-kilometer strip, which joins the Pacific and Atlantic oceans.

In these parks, five of them in Oaxaca, the federal government plans the installation of companies of different types such as agribusiness, textiles, and even automotive, although it ensures that these have not been defined, on lands that have different origins, as donations or that already they were federal, but most are lands that belong to peasants.

That is why, the CIIT points out, that since 2019 a process of Indigenous Consultation with the communities has been carried out and “the multiple requests are registered and they are being attended” since the intention is to reach agreements “through dialogue with the isthmeños ” since there are sectors that resist the sale of the land and accuse that such consultations are carried out“ in a manner ”.

While this is happening, Marín Mollinedo points out that “a strategy is being worked on with the Ministry of Foreign Relations (SRE), led by Marcelo Ebrard, to carry out a dissemination campaign in Mexican embassies in other parts of the world and thus attract and work in projects according to the philosophy of the Isthmus Program. We are looking for companies that share the vision and the social and economic commitment of the program, to balance profits with inclusion ”.

However, the search for investors “in other latitudes of the world”, a strategy developed by the Mexican Foreign Ministry, does not correspond to the position expressed by the President in his recent visit to Salina Cruz, on May 9, where He said that the 10 industrial parks will be under state control and will not be handed over to individuals.

For Carlos Beas Torres, advisor to the Union of Indigenous Communities (Ucizoni) and one of the main nuclei of resistance against this megaproject, since the federal government presented the Isthmus Plan, which they consider a copy of the programs that the Previous PRI and PAN governments, it was observed that AMLO’s priority was on national and foreign capitals and not on the needs of the indigenous peoples of the Isthmus, who will be the ones who experience the negative impacts of this industrial corridor.

For that reason, “AMLOs 4th transformation is in a hurry to impose the sale of land through simulated consultations,” he adds.

Just last Tuesday, May 25, Zapotec residents of the municipalities of San Blas Atempa, Santa María Mixtequilla, and Ciudad Ixtepec, rejected from Mexico City the imposition of the consultations carried out by the federal government to “impose” the industrial parks. According to the CIIT, in these municipalities of Oaxaca, the consent of the citizens has already been obtained for industrial parks to be installed in polygons of 500 hectares.

“The peoples of the Isthmus, where indigenous Zapotecs, Ayuujk, Chontales, Zoques, and Ikoots live, demand better health, education, communication, employment, and support services for primary production. Unlike the government of the 4T, the priority of the peoples is not in the modernization of the Trans-isthmian Train, ”reiterates Carlos Beas Torres, who insists that indigenous peoples want to eat and do not long for a gas pipeline, like the one recently announced by the Mexican government. and that contemplates an investment of 9 billion pesos.

In the opinion of Gerardo de Gyves, who was one of those who formally requested in the assembly of Ciudad Ixtepec that the President’s proposal be retaken so that the peasants are considered partners of the investors and not be dispossessed of their lands, the position of Marín Mollinedo It should revolve around the Mexican State being the one that gives the certainty.

“The sale of the lands, in the end, does not benefit the entire society involved in the T4 projects. With the sale of land, where the CIIT is offering between 200 thousand and 250 thousand pesos per hectare, not all citizens will benefit, but only the owners of the parcels, whether they are ejidatarios, community members, or possessors in the regime of small owners. If investors want certainty, does the Mexican government not have the tools to provide them from the association’s scheme? ”He asks.