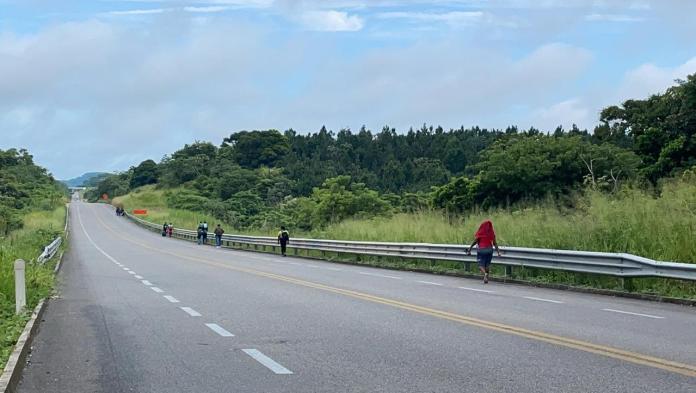 In Veracruz, Haitian migrants have been seen walking along the roads to cross the state, after leaving their country in search of a better quality of life.

Why must Haitian migrants cross Veracruz?

The migrants Haitians fleeing political, social, economic, and natural disasters problems that have impacted your country. Most of these foreigners, in Veracruz, were part of the caravan that was dissolved by Migration in Tapachula, Chiapas.

These are men, women, children, and pregnant women who dodge vehicles on the roads of Veracruz, and who have now embarked on the north of the country, or the United States.

In this state, it is in Las Choapas where Haitian migrants rest, finding the solidarity of some people who have provided them with water, food, clothes, shoes, and even strollers so that the children do not walk.

But they only rest for a few hours, then small groups continue on their way, and they do it on foot because despite having money to pay for public transport, no one wants to take them for fear of being accused of illegal human trafficking.

Their next stop in Veracruz would be Coatzacoalcos, where they hope to gather strength to continue on their way. On the way, some have suffered dehydration, but they say that not even the fatigue compares with what they suffer in Haiti.

“We are out there stranded for that reason because we want to move forward and there is no way to move forward, if the taxi drivers and buses do not want to take us, we have to walk and when we walk, we walk a lot we get dehydrated, people have to us give water because you see what they are thinking, imagine people with a child and a car comes after him, ” said Max, a Haitian migrant.