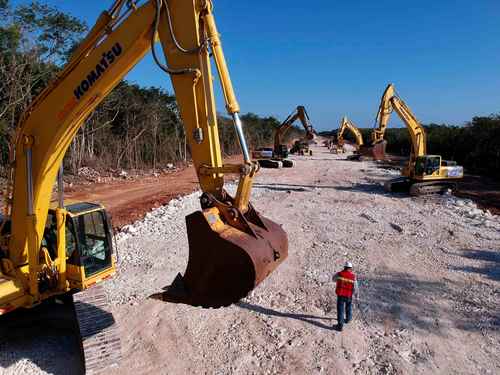 The entities of Chiapas, San Luis Potosí, Mexico City, Nayarit, and Sinaloa would also be considered essential axes in the next year for the economic reactivation of the country.

The entities most benefited by the investment works registered in the Federation Expenditure Budget Project (PPEF) 2022 are Veracruz, State of Mexico, Oaxaca, and Tabasco.

While the states of Colima, Morelos, Aguascalientes, Baja California Sur, Zacatecas, and Jalisco are not considered as priorities for major works by the federal government for next year.

In accordance with the Investment Priorities 2022 section of the PPEF Explanatory Memorandum, the Government of Mexico considers it necessary for investment projects to promote the mobilization of resources in the context of the Covid-19 pandemic, and “more broadly, its complementary role in the generation of jobs with decent wages to achieve economic reactivation ”.

In other words, an investment priority will allow the recovery of macroeconomic stability in the country’s regions to continue.

“In order to trigger development in the areas with the greatest extreme poverty in the country and guarantee higher levels of well-being for the entire Mexican population, the Government of Mexico will continue to complement social programs for well-being with strategic infrastructure projects that multiply the economic spillover and contributed to growth benefit those most in need “, reads the document.

“The infrastructure actions of the Government of Mexico are aimed at triggering development in areas with greater social backwardness and marginalization, seek to promote greater equity between the various regions of the country in order to achieve equal opportunities to generate income and improve the quality of life of the population ”, he asserts.

In this context, it was identified that one of the entities most benefited by the number of projects it holds in the Investment Priorities 2022 category is Veracruz. For example, it appears, along with Oaxaca, in one of the emblematic works of the Federation, the Interoceanic Corridor of the Isthmus of Tehuantepec, which for next year resources for 10,000 million pesos are expected.

The other projects for Veracruz would be the Papantla Federal Penitentiary Complex (1,327 million pesos planned for 2022), the rehabilitation of the Poza Rica – Tampico highway (250 million; includes Tamaulipas and Tabasco), the modernization of the Acayucan – La highway. Ventosa (204 million; also benefits Oaxaca), the expansion and paving of the Zontecomatlán – Xoxocapa Ilamatlán road (120 million), and the work on the modernization of Minatitlán – Hidalgotitlán (68 million).

Veracruz also appears in two projects of public-private associations: Conservation and maintenance of the Federal Network (total of 7,355 million pesos of federal resources) and Projects of Provision of Services (5,117 million), with the sections Coatzacoalcos – Villahermosa and Nuevo Necaxa – Tihuatlán, respectively.

In addition, the entity is considered in the conservation and maintenance of the Federal Network (Texcoco – Zacatepec) and Service Provision Projects (Pirámides – Tulancingo – Pachuca), as well as in High Specialty Regional Hospitals, together with Tamaulipas and Guanajuato, with a total of 1,432 million pesos between the three states.

The Integrated Transportation System for the Eastern Zone of the Valley of Mexico is also mentioned, although the amount for the following year is not specified.

Oaxaca and Tabasco are the other investment emblems of the federal government for 2022, according to the number of appearances in the projects in the Investment Priorities 2022 section of the Explanatory Memorandum of the PPEF.

In addition to being in the works referred to together with Veracruz, such as the Interoceanic Corridor of the Isthmus of Tehuantepec and the Acayucan – La Ventosa highway, Oaxaca is manifested in the Service Provision Projects corresponding to the Mitla-Tequisistlan-Entronque Tehuantepec II and Tapachula sections -Talisman with a branch to Ciudad Hidalgo (along with Chiapas and Puebla).

The expansion of the Puerto Escondido Huatulco highway (524 million pesos programmed) and the allocation of 100 million for the modernization of 25.7 kilometers of the highway in the Amuzgos Zone for the inhabitants of the states of Oaxaca and Guerrero are expected.

In the case of Tabasco, its detonation would run at the hands of the Mayan Train (with Campeche, Yucatán, Quintana Roo, and Chiapas), the flagship project of the Andrés Manuel López Obrador administration, with 62.942 million planned for the following year.

The hydrological project to protect the population from floods and make better use of the water in Tabasco stands out, with the proposal for 2022 to allocate 2,322 million pesos to continue with the development of the works, as well as their inclusion, with Yucatán, Nayarit, and Mexico City, in the ISSSTE hospital infrastructure package for 2,673 million.

The other flagship territories of the Federation

Other entities that constantly repeat in the 2022 Investment Priorities of the PPEF are Chiapas, San Luis Potosí, Mexico City, Nayarit, and Sinaloa.

The projects that stand out are the Mayan Train and the expansion of the Palenque – San Cristóbal highway (770 million pesos) for Chiapas; the new campus of the Polytechnic University of San Luis Potosí (230 million) and the modernization of the Portezuelo – Ciudad Valles – Tamazunchale highway (975 million) for the territory of Potosí; the mobility works and the integral project of the Bosque de Chapultepec Cultural Complex (3,824 million) for the country’s capital.

Meanwhile, the least benefited states in the 2022 Investment Priorities would be Baja California, Chihuahua, and Tlaxcala, each with only one mention in the referred section, that is, the ranking was not made by amount.

For Baja California, a water resources project is planned for 1,855 million pesos budgeted; for Chihuahua the completion of the Badiraguato-Parral highway for 338 million, which it shares with Sinaloa, and for Tlaxcala the conservation and maintenance of the Texcoco – Zacatepec highway, which includes Puebla and the State of Mexico.

Finally, Colima, Morelos, Aguascalientes, Baja California Sur, Zacatecas and Jalisco do not appear in the Investment Priorities 2022 of the Explanatory Memorandum of the PPEF.

It should be noted that in the aforementioned item, for example, the allocation of 795 million pesos does not appear to continue with the maintenance of the 8 Fonatur Integrally Planned Centers located on the beaches with the greatest influx: Ixtapa in Guerrero; Huatulco in Oaxaca; Bay of Banderas in Nayarit; Los Cabos and Loreto in Baja California Sur; Playa Espiritu Pacific Coast in Sinaloa; Cancun and Cozumel in Quintana Roo.

In driven investment, which represents the sum of the budgetary investment in charge of the agencies and entities of the federal public administration, an estimated 950,000 million pesos

For the CFE, a physical investment expense of 47,573 million pesos is estimated, of which 13,259 million correspond to amortization payments of 134 Pidiregas and 34,314 million pesos to budgetary physical investment destined to the construction of electrical infrastructure, maintenance and acquisitions of basic electrical equipment in the generation, transmission and distribution activities.

Additionally, the Federation indicates that it promotes a portfolio of 67 public infrastructure projects that add up to a mixed investment of 557.564 million pesos.

Gulf Train: From Matamoros to Xalapa! The route and everything you need to know about the project