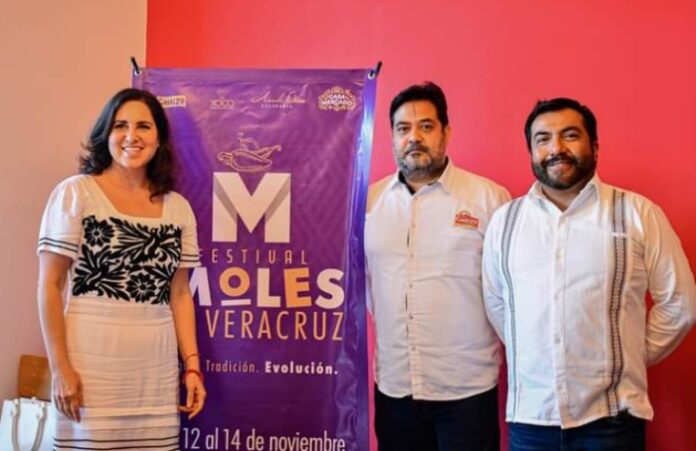 Coatepec, Veracruz.- “Moles are the best cultural expression in Mexico and obviously in the state of Veracruz,” says chef Arodi Orea, announcing the celebration of the Moles de Veracruz Festival, from November 12 to 14.

Known for his research on Veracruz gastronomy, he highlights that this festival is about showcasing what this emblematic dish means for Veracruz and all Mexicans.

The moles in their different styles are always present on the Veracruz table, they are a melting pot of flavors and aromas accumulated from centuries of history and many generations that still preserve the ancient recipes.

He indicated that for the festival a selection was made of 20 different types of moles from Tamiahua, in the Huasteca region, from Misantla in the Totonaca Region, from Huatusco in the High Mountains, and from Los Tuxtlas.

He assures that this selection was somewhat complex, as they wanted to have representatives of the northern, central, and southern areas of the state, as well as from the mountainous area or the coast.

Cultural zones and geographical zones were considered, as well as aspects related to the different preparation techniques and ingredients for each of them.

In this sense, he refers that Creole chilies are the base of the flavor that characterizes each Veracruz mole and they are the main ingredient that determines its flavor and smell.

In summary, he refers that this festival seeks an approach with the Veracruz moles because in the states of Oaxaca and Puebla the moles are a reference, not so in Veracruz where there is no characteristic one and tourists have no idea of ​​the diversity of moles that exist.

At the event, a gala dinner will be held in which the guest will be chef Gerardo Vázquez Lugo, who is a representative of Mexican cuisine in the world.

The Moles de Veracruz Festival will be held at the Valle de la Pitaya Recreational Center, where in addition to the gastronomic part, conferences will be held with the attendance of cooks from various regions of the state of Veracruz.