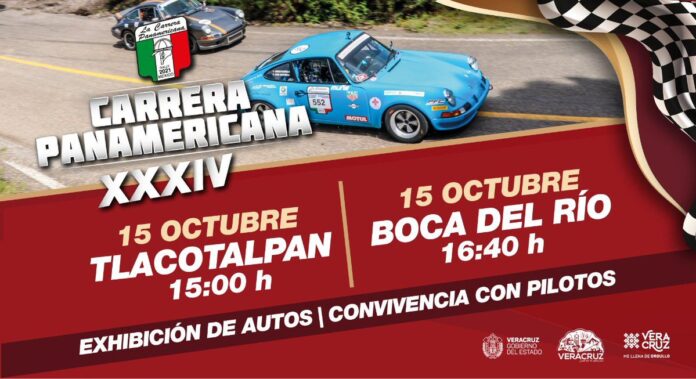 OAXACA. October 15, 2021.- The 34th edition of the Carrera Panamericana started this Friday in the city of Oaxaca.

The Oaxacan driver, Emilio Velázquez, came out in the first position since this Thursday he won in the qualifying stage that took place on the road from Villa de Mitla to San Bartolo, in the municipality of San Lorenzo Albarradas.

In this edition of the traditional race, Emilio Velázquez is looking for his third championship with his famous Golden Tiger vehicle.

For the first stage, the route will be from Oaxaca to Veracruz, in which the pilots will pass through the Oaxacan regions of Valles Centrales, Sierra Norte and Cuenca.

The Carrera Panamericana in its 34th edition will be held from October 15 to 21 with a 3,600-kilometer route that began in the city of Oaxaca and will conclude in Saltillo, Coahuila.

The route is as follows:

This year the Carrera Panamericana will launch an APP, through which both spectators and competitors will have an instant access tool to the content and will be able to interact with various activities during the tour.

They will also broadcast the race again via LIVE Stream, in which last year it reached Internet users in 42 countries.

4th Orizaba Classic Auto Show, find out where and when