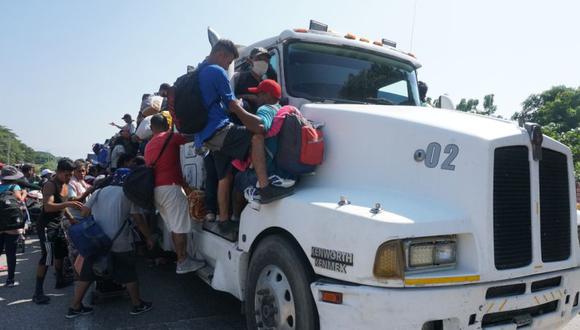 There were no injuries during the incident and the group is preparing to leave the state of Oaxaca to enter Veracruz, on its way north.

Members of the migrant caravan had a new confrontation with elements of the National Guard on Friday (11/12/2021), after the authorities tried to slow down their passage in trucks on their journey through southern Mexico, which has now lasted 20 days.

The migrants, who have traveled more than 340 kilometers from the states of Chiapas and Oaxaca, decided not to walk anymore and on the way changed their strategy and got on tractors to move about 22 kilometers from Santiago Niltepec to La Venta.

However, when they learned that the trucks were heading to the trans-isthmian highway towards Veracruz, they decided to change the route and move towards the municipality of Matías Romero.

The troops blocked the road and tried to stop the first of three trailers in the forefront, which caused a group of them to descend from the platform and reach a patrol, who they beat.

After the incident, which did not progress due to the intervention of the activist Irineo Mujica who calmed his companions, the troops decided to open the way for them.

This incident joins that of last week when there was a clash with the National Guard between migrants and agents, with several detainees and also injured security elements.

A total of 800 migrants from the caravan have regularized their situation in the country through the National Migration Institute (INM) and, as a result, have left the contingent.

The region is experiencing a record migratory flow to the United States, whose Customs and Border Protection (CBP) “found” more than 1.5 million illegal immigrants on the border with Mexico in fiscal year 2021, which ended on September 30.

Several UN agencies and NGOs criticized the use of force in the operations to disintegrate these caravans.

The region is experiencing a record migratory flow to the United States, whose Customs and Border Protection (CBP) “found” more than 1.5 million illegal immigrants on the border with Mexico in fiscal year 2021, which ended on September 30.

In addition, Mexico has detected more than 190,000 undocumented immigrants from January to September, about triple the number in 2020, in addition to having deported almost 74,300, according to the Migration Policy Unit of the Ministry of the Interior.

More than 400 migrants found hidden in cargo trucks in Veracruz