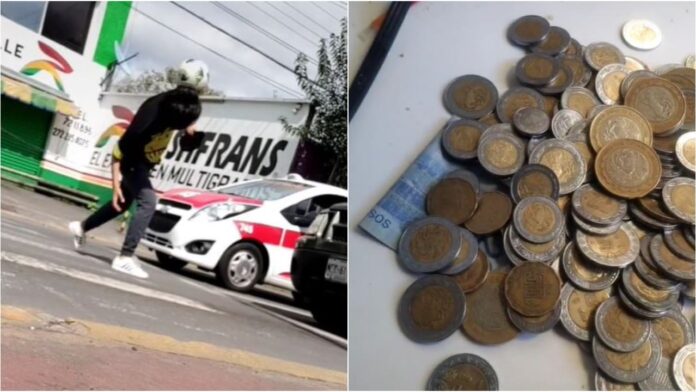 The young man assured that with the money he earns he pays for his studies and that he also has a job as a graphic designer.

When the traffic lights turn red, this is the opportunity that some people find to earn a coin by doing different activities, such as cleaning windshields, selling candy or doing tricks with a soccer ball, as is the case of Alex Rivera, a young from Veracruz, who announced how much money can be earned in one day with this activity.

It was through his TikTok account that Alex (@alexstylers) decided to show his followers how much money he can make by mastering a soccer ball when the light is red.

In the video, Rivera can be seen performing multiple tricks with a soccer ball (an activity known as freestyle soccer) to later receive some coins of different value.

At the end of the playback, Alex can be heard claiming that he won around 400 pesos for dominating the ball at the traffic light, which he confirmed in a later video.

An important fact to rescue, and that may come as a surprise, is that the amount of 400 pesos that the young man collected was in only approximately three hours.

This was recognized by Alex, who pointed out that this activity is only carried out one or two days a week (weekends) and what he earns is used to pay for his studies.

After the video went viral, Alex received several comments, some positive and others negative, among the latter that of a user who assured that he did not give money to people who asked for money at traffic lights, because he considers them “a ball of hustlers”.

Given these comments, Alex explained that he is dedicated to this activity because he pays for his school, although he also has a permanent job as a graphic designer in a gym and two restaurants in Nogales, Veracruz.

In addition, the young man advised his followers to show their talents in order to have an income, since it is also “honest money”, although he encouraged them not to leave school and get a stable job, so as not to “only depend on a traffic light”.