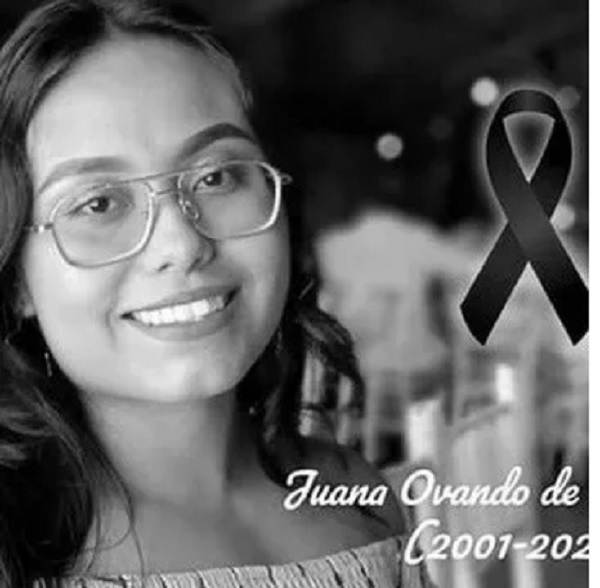 XALAPA, VERACRUZ (April 26, 2022).- Hundreds of feminists took to the streets of the city of Xalapa, the state capital of Veracruz, to demand justice for Juana Ovando de Los Santos, a 21-year-old girl who was murdered by her neighbor last Wednesday, April 20, inside her own home.

The contingent gathered at the “Ignacio de la Llave” State Theater and then marched towards the Benito Juárez Park Viaduct and the Government Palace, where they painted with spray paint to show their weariness with the constant violence suffered by women at the National level.

“For Juana and for all those who could no longer march”, “What is our president doing to stop this madness?” and “We are not all, femicidal Mexico,” was read on some of their banners.

Juana Ovando was originally from Agua Dulce, Veracruz, she moved from the southern part of the state to the capital, where she was attacked with a hammer and a knife by her neighbor. Her body was found in a room on Aquiles Serdán street, in the Guadalupe Rodríguez neighborhood, near the downtown area of ​​Xalapa.

She rented a room with her boyfriend and they subsisted by selling flavored ice cream. She intended to enter the next cycle at the Universidad Veracruzana and was also immersed in the youth networks of politics since she was Secretary of the Youth of the National Confederation of Popular Organizations (CNOP) of the Institutional Revolutionary Party (PRI).

Juana had participated in feminist demonstrations during the years 2020 and 2021.

The alleged murderer, Serge “N” was arrested and accused of femicide by the State Attorney General’s Office (FGE) in this case.

The feminists walked on Manuel Ávila Camacho avenue, passed through the viaduct and joined Ignacio Zaragoza street and later concentrated on Plaza Sebastián Lerdo de Tejada, in front of the Government Palace.

The women also exhibited a canvas with photographs of women who are missing in the Veracruz entity; 160 disappearances of adolescent women and girls are recorded in Veracruz, during the first quarter of the year, according to figures from activists.

A woman and a young homosexual were spraying foam on the photographic and video equipment used by reporters to cover the march on Sunday, April 24th.

The mobilizations were also carried out in Tuxpan, in the north of the state, and in other municipalities of Veracruz.