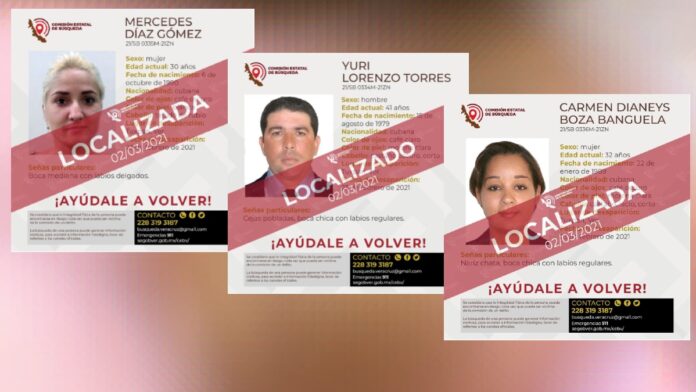 The three Cuban students who were missing in Veracruz were found; This was reported by the State Search Commission through its social networks.

In the Facebook account of the State Search Commission in Veracruz, the files of the three Cubans ( Carmen Dianeys Boza Banguela, 32 years old; Mercedes Díaz Gómez, 30, and Yuri Lorenzo Torre, 41) appear with the legend “Located”.

Although the disappearance and subsequent discovery of these three Cubans generated hundreds of reactions among Veracruz society, so far no details of the case have been released.

The Cubans were in Tuxpan to study

When the three Cubans were reported missing in Veracruz, it was revealed that Carmen Dianeys, Mercedes and Yuri were residing in the municipality of Tuxpan because they began studies at the Faculty of Biological and Agricultural Sciences of the Veracruzana University.

The three Cubans allegedly went to the Cuban Consulate in Boca del Río to carry out procedures related to their stay in Mexico; however, relatives and authorities lost communication with them since last February 23.

When the media questioned the governor of Veracruz, Cuitláhuac García, about the case, he mentioned that there was no investigation by the authorities of the entity because the family of the three disappeared Cubans did not want to be searched.

The information has been released unofficially that the three Cuban students are currently under the protection of the United States immigration authorities, although no government has come out to confirm or deny such a version.