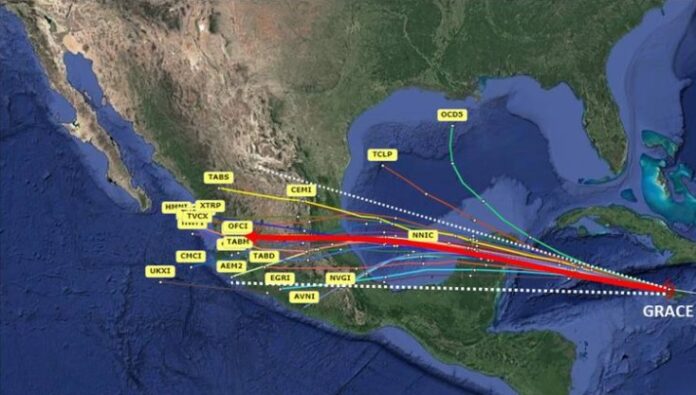 It is moving rapidly and is expected to intensify to a category 1 or 2 hurricane for the night of Friday, August 20, or early Saturday, 21st.

Xalapa, Ver.- Tropical storm “Grace” is moving rapidly and is expected to intensify to a category 1 or 2 hurricane for the night of Friday, August 20, or early Saturday, with an impact in the center and north of the state of Veracruz.

Alejandra Méndez Girón, the coordinator of the National Meteorological Service, announced that accumulated rains in the range of 350-400 mm are expected for the entity the following weekend.

At a press conference of the National Water Commission, he reported that there is the possibility of increased flows of streams and rivers, flooding in low-lying areas, and possible landslides. Also, damage to roads and highway sections.

In order to provide care to those who require it, Civil Protection announced that in the state there are 2,022 temporary shelters with a capacity for 481,895 people.

According to the weather forecast, they explained that there is special surveillance in the probable area of ​​influence of “Grace”, as well as in the south.

Also, the Tuxpan and Cazones rivers, near Poza Rica, and Nautla, near Martínez de la Torre and Carrillo Puerto. As for the dams, they are from the southern area.

Among the previous general recommendations is the call to identify risks and prepare actions outside the home, such as garbage collection and drain cleaning.

Other indications are to prepare a civil protection family plan and an emergency backpack, in addition to locating evacuation routes and temporary shelters.

During the storm, stay sheltered and, if necessary, evacuate.

In case of risk, you should not cross rivers and avenues of water.

After the storm it is necessary to verify that there is no longer a risk, return to the house and check if there is no damage.