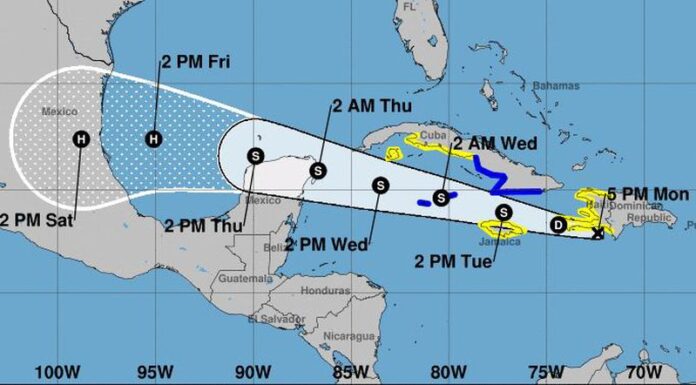 Following a lull in tropical activity over the Atlantic basin, three cyclones have already formed in recent days and we have one in our sights, Grace. The forecasts indicate effects in Mexico in the next few days; it is time to take preventive measures.

At the beginning of August, we had the passage of the convective phase of the Madden-Julian Oscillation (MJO) over Mexico, which now runs across the Atlantic, while El Niño – Southern Oscillation (ENSO) is transitioning to cold La Niña conditions. This large-scale situation favors an increase in the conditions for the development of tropical cyclones over the Atlantic, Caribbean and Gulf of Mexico, which is currently being experienced with cyclones Fred, depression Ocho and Grace, the latter being the one that interested in the Mexican Republic.

Grace depression was located at 4 pm today, Monday, August 16, 80 km south of Port-au-Prince, Haiti and more than 1500 km east of the coast of Quintana Roo with a sustained wind of 55 km / h and moving west-northwest at 20 km / h. The recent departure of the global GFS and ECMWF models, as well as the official forecast of the National Hurricane Center, have direct effects in the Yucatan peninsula and between Tamaulipas-Veracruz.

As Grace moves in a dominant direction to the west, it is likely to intensify to a tropical storm this Tuesday, the 17th near Jamaica; on Wednesday 18 he would be crossing the Cayman Islands to the south of Cuba and could be close to Cozumel and the coasts of Quintana Roo during that same night. In the course of Thursday 19, everything indicates that it will cross the north of Quintana Roo and Yucatán with gusts of wind greater than 70 km / h and rains that generate accumulated 70-150 mm without ruling out locally greater with potential floods, falling trees/branches and power outages. Grace can generate storm and hurricane effects in the southeastern and eastern states of Mexico. It is time to take preventive measures.

Towards the afternoon of Thursday and during Friday, the cyclone would maintain a storm category with the probability of rapidly escalating to a hurricane once it moves over the Gulf of Mexico. IMPORTANT: current assemblages and trajectories indicate that Grace could make landfall again between Friday 20 to Saturday 21 at some point in Tamaulipas and Veracruz, being, for now, the most likely in its border area. This still has room for error and can move further north or south, as well as varying its intensity, but it is time for the population in the region to be awaiting updates.

Preventive measures against the entry of the cyclone

The amount of rain will depend on the location of the system, but for now, much of the southeast and east is observed with the largest accumulated exceeding 50 or 100 mm, being very important that from this moment preventive measures are carried out such as identifying shelters or temporary shelters, evacuation routes, have important documents on hand and put them in bags, uncover drains, protect the glass in windows and/or doors and in due course, monitor the behavior of the levels of rivers/streams near your locality.

Remember that the trajectory of tropical cyclones can vary from one moment to another and although they now indicate the aforementioned, it is not ruled out that it varied to a greater or lesser extent. It is likely that August will end with rainier conditions than normal in various regions of the country, with the threat of cyclones still presenting to the south or east of the Mexican territory.

We are currently heading for the second peak of the rainy season, which may be greater due to the development of La Niña and hydro-meteorological emergencies in a short period of time can be generated. Given this, the Meteored Mexico team will be constantly updating the state and weather forecast in a timely manner, in order to prevent the population.