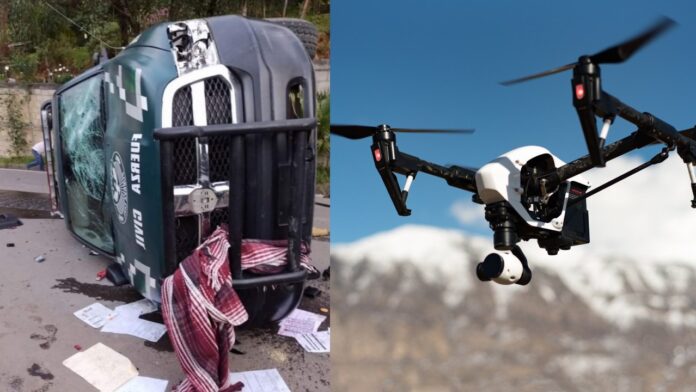 New footage purportedly shows a major Mexican cartel dropping bombs on rival camps with a drone — marking the latest instance of instability and violence in the region from a cartel that officials say has been growing rapidly.

Multiple Mexican outlets aired the footage that purportedly shows a drone above a wooded area, dropping explosives onto a camp below. People can be seen fleeing from the area as the bombs rain down on them and explode.

El Pais reports that the drone was launched by the Jalisco Nueva Generacion Cartel in Tepalcatapee, Michoacan and was one of a number of attacks launched by the cartel in different towns in the same area.

It’s the latest sign of dominance from the cartel. A 2020 Washington Post report detailed how the cartel has killed lawmakers, judges, cops and civilians and now controls the movement of more than a third of all drugs consumed in the United States.

The Drug Enforcement Administration in December described the group, known as the CJNG, as “one of Mexico’s most violent and prolific drug trafficking organizations, which has been flooding the United States with fentanyl and methamphetamine, causing the overdose and death of Americans.”

“Disrupting and destroying this organization remains one of DEA’s highest priorities,” read the statement, which offered a reward of up to $5 million for information on one of the senior leaders of the cartel.

Earlier this month, nine bodies were found on the roadside in the coastal state of Veracruz, which authorities chalked up as a response to the work being done to fight crime in the area.

Local media reported that a handwritten message threatening authorities were signed by “the four letters” — referring to CJNG. That came a day after the bodies of eight men and two women were found in front of the governor’s office in the state of Zacatecas.

The state’s chief prosecutor said seven of the 10 bodies had been autopsied and were found to have died from strangulation.