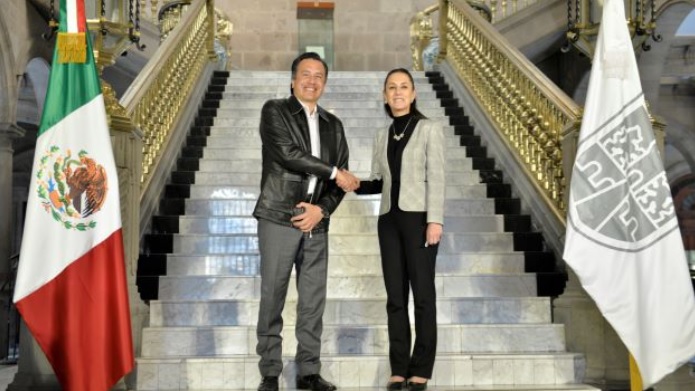 In Mexico City, the governments of Mexico City and Veracruz signed the Framework Agreement for the Coordination of Technological Innovation to achieve the maximum use of security, human capital, material, financial, academic, and technological resources, as well as other areas of interest and mutual benefit with a view to developing projects that meet the needs of the population.

The head of the Digital Agency for Public Innovation (ADIP), José Antonio Peña Merino, explained that digital collaboration and unification of the technological agenda, simplification, and attention with the purpose of reducing face-to-face procedures through proprietary software with more than 200 programs developed, is one of the first actions to implement.

Having said computer package in Veracruz would mean the possibility of virtual procedures, such as those related to circulation cards, complaints, non-criminal records, renewal of licenses, and issuance of birth, marriage, or death certificates, thus generating significant savings not only for the Government but also for the applicant.

Governor Cuitláhuac García Jiménez highlighted the example of efficiency and honesty in managing resources to serve citizens; therefore, the importance of reciprocal support prevailing among the administrations promoting the Fourth Transformation.

He thanked the CDMX Government for its solidarity in sending two brigades to Poza Rica, one of the cities most affected by the passage of Hurricane Grace, last August; “They were there for weeks assisting the population, their brothers. Today I want to extend the gratitude of the people of Veracruz to all the workers”.

The Head of the capital’s government, Claudia Sheinbaum Pardo, said that this cooperation is an example and distinctive of the 4T; “Put technology at the service of citizens […] and show honesty and fight against corruption using technological advances.

“With Cuitláhuac we are united by republican austerity, moral economy, ethics, the fight against corruption, the fight for justice, and also the conviction that politics is everyone’s business. The construction of a democratic country goes through the participation of the people of Mexico, it is not a matter only for the elites”, he expressed.

In the same act, awards were given to personnel from the Ministry of Works and Services and the Mexico City Water System. From the Government of the Republic, the Secretary of the Government, Martí Batres Guadarrama; while for Veracruz those of Government, Eric Patrocinio Cisneros Burgos, and of Finance and Planning, José Luis Lima Franco.