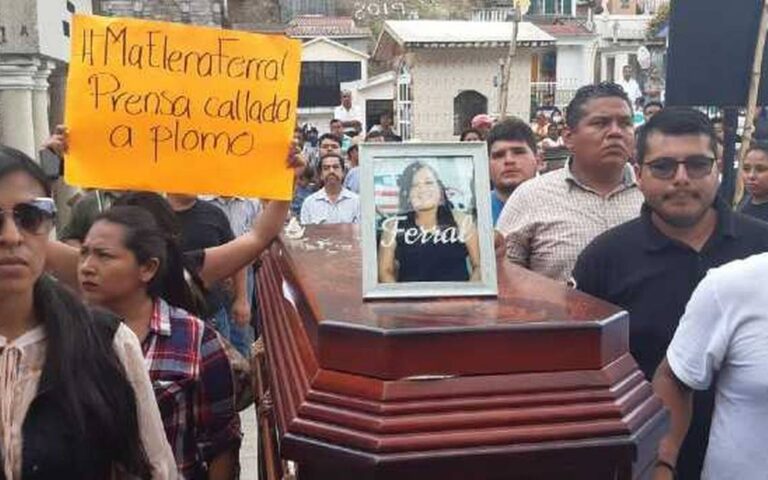 London, England – Mexican journalist Maria Elena Ferral Hernandez, who was murdered in March 2020, was awarded on March 24th with the 2021 Courage in Journalism Award from the Legatum Institute.

Co-founder of the website El Quinto Poder de Veracruz, and correspondent for the Diario de Xalapa and El Heraldo de Poza Rica, Ferral was assassinated in broad daylight after publishing an article detailing the murders of four pre-candidates for the municipal mayoralty of Gutierrez Zamora.

Ferral survived three attempts on her life, having published stories of local corruption among politicians and criminal activities, including kidnappings and disappearances. She was based in the Papantla region of the State of Veracruz, which is recognized as valued territory for criminal groups that use the state highway to transport illicit goods and drug trafficking. Reporting in the region is generally considered a death sentence, and Veracruz is the most dangerous state in Mexico for journalists.

Despite this, Ferral continued her work with a deep commitment to the people, believing that the mission of her work as a journalist was to serve her community. She was well aware of the risks to her life, but her conviction in the need to seek the truth and report accurately for the benefit of all Mexicans gave her perseverance.

Each year, the Courage in Journalism Prize is awarded posthumously to a journalist who has been murdered as a direct result of his work and whose death has had a significant impact.

David Wesson, Managing Director of the Legatum Institute, commented: “Maria Elena Ferral Hernandez is a worthy recipient of this award; she was certainly a beacon of hope in a county ravaged by violence, where journalists are often deliberately targeted. Maria Elena’s commitment to the truth, despite the ongoing personal cost and her refusal to be intimidated, speak volumes about her inner strength and courage.

“We owe Maria Elena, and all the journalists who work tirelessly in the search for truth, a great debt. Unfortunately, in many parts of the world journalists can still pay the highest price for free, fair and rigorous reporting. This award honors the legacy of these men and women and sheds light on countries where freedom of the press is still limited by crime, corruption, war or state censorship.”

In 2020, Reporters Without Borders reported the deaths of eight journalists in Mexico. ARTICULO 19, a human rights organization with a focus on defending and promoting freedom of expression and freedom of information around the world, recently released figures showing that the country has experienced a 12 percent year-on-year increase in deaths of journalists since 2009, following the government’s militarized crackdown on drug cartels. As a result, Mexico was the site of the highest number of journalist deaths in the world in 2020.

However, Mexico is not the only country where press freedom is at risk. Almost three-quarters of the 167 countries included in the 2020 Legatum Prosperity Index experienced declining levels of freedom of expression and access to information over the past decade. Around the world, journalists’ safety, freedom from government censorship, political diversity of perspectives in the media, and freedom of opinion and expression were at lower levels in 2020 than in 2007.

Pedro CÃ¡rdenas, Case Documentation Coordinator for ARTICULO 19 Mexico, commented: “As media freedoms continue to be threatened and undermined around the world, it is essential to highlight the fundamental role that free and fair journalism plays in flourishing societies. Press freedoms are an essential component of the functioning of a democracy, and people have the right to access information to ensure they are empowered to debate critical issues and hold leaders to account.

“It is disappointing to see Mexico once again assume the position of one of the most dangerous countries in the world to be a journalist. However, given that more than 98% of attacks and killings of journalists do not lead to prosecution, it is perhaps not surprising that this trend has continued. Impunity remains a serious concern, and journalists investigating the nexus between organized crime and corrupt officials are the most frequent targets. However, until the Mexican government sees freedom of the press as a fundamental component of prosperity, criminals will continue to threaten and kill journalists, in what is considered a ‘permissive’ environment.

“Better training for public officials, police and judges in Mexico is essential to ensure they fully understand the key role journalists play in prosperous democracies. The international community can also play a vital role, by continuing to pressure the Mexican government and reminding it of its responsibility to both citizens and journalists.”

The Legatum Institute’s Prize for Courage in Journalism was launched following the murder of Maltese journalist Daphne Caruana Galizia in 2017 to honor her death and shed light on the real dangers journalists face in many parts of the world.

The 2020 winner of the Courage in Journalism Award was Raed Fares, the Syrian journalist and activist who had worked tirelessly to draw international attention to the ongoing violence in Syria; and in 2019, Jan Kuciak was named recipient following his investigative report on corruption in Slovakia.

To view the profiles of the 44 journalists killed between October 2019 and October 2020 who were considered for the Courage in Journalism Award 2021, click HERE.

The Legatum Institute is a London-based think tank with a bold vision of creating a global movement of people committed to creating the pathways from poverty to prosperity and transforming society.