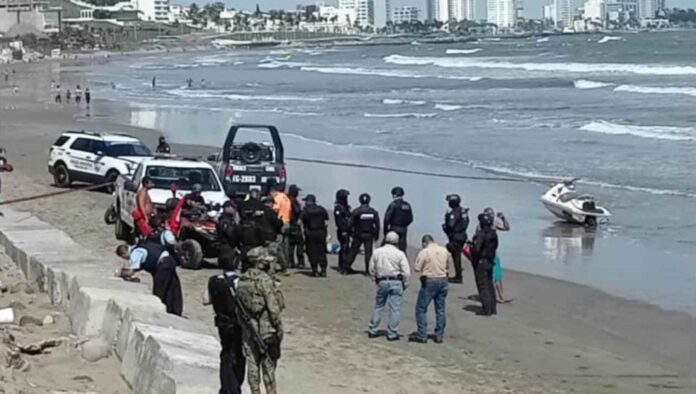 Drowning of bathers on the beaches of the conurbation are registered, for the most part, outside of holiday periods

Just last weekend, three people drowned in beaches and rivers in Veracruz; the deaths also marked the beginning of the Easter holidays and broke the “record” for white balance in the last two years in a similar season.

In the port, José RL died on March 24 after entering the sea after ingesting alcoholic beverages, according to the authorities; In Tuxpan, a young man from the port of Veracruz who was in Playa Solita, in that municipality, died.

Similarly, this Sunday, March 28, the death of 14-year-old Sergio Alexander was reported in the Papaloapan River.

The deaths are added to 18 deaths that have occurred in the last two years only in the Veracruz – Boca del Río – Alvarado tourist corridor. At the national level, Veracruz has an average of 200 deaths of this type, 10 percent of all those that occurred in the country.

Although it is true that the authorities of the three levels of government highlight the coordination to achieve white balance in the festivities, the rest of the year the safety of the bathers is in doubt.

Most of the cases have been justified by the state authorities by stating that visitors are given instructions not to enter certain areas, but they ignore it, ending up drowning.

The authority, through the State Council for the Prevention of Accidents (COEPRA), has confirmed that drowning by submersion triples on this date, being Tuxpan the one that registers the most deaths, followed by Tecolutla, Coatzacoalcos, Papantla and Tantoyuca, where they are the men who die the most, in a range starting at 26 years of age.

During 2020 the aforementioned beach runner did not record any death due to drowning in the implementation of the Easter operation. However, the rest of the year there were several cases.

The first was that of a man between the ages of 25 and 35 who were found on El Morro beach on one side of Miguel Aleman boulevard in the municipality of Boca del Río.

Days later, on the 23rd of the same month and again in Boca del Río, a 20-year-old from Puebla died on Los Arcos beach.

On March 8, 2020, on the beaches of Alvarado, 38-year-old Hugo AH died, specifically at Playa Zapote.

A 64-year-old man was also a drowning victim last year in Veracruz. The death occurred in Playa de Vacas, in Boca del Río. His death was recorded on June 6, 2020.

Alfonso CH, 35, died on October 2, 2020, on Antón Lizardo beach, in the municipality of Alvarado; his body was located until two days later, on October 4.

In the port of Veracruz, on Regatas beach, a person lost his life just a few days after his death, on October 22, 2020.

The biggest tragedy of the last two years in Veracruz took place in December of last year in Alvarado, where three minors drowned: Uriel SL, 15 years old; Brian SL of 13; as well as Alexander SL of just 10.

The first reported death in the most important beach area of the entity for that year occurred on April 18, within the framework of the Easter holidays, which took place from April 14 to 21.

The victim was a 35-year-old woman from the State of Mexico identified as María del Rosario OV, who drowned that Holy Thursday on the beach of the Mata de Uva community in the municipality of Alvarado.

Among the deaths that are counted outside the vacation period and, therefore, outside of all surveillance and protection of the authority, there is one of May 12 of that year. The victim was a 29-year-old man who lost his life on La Bamba beach, in Boca del Río.

On July 10, a 45-year-old man died at Playa Regatas, in the municipality of Veracruz, in the middle of the summer vacation operation.

Days later, on July 27, another man died; the excuse of the local authorities was that the lifeguards warned him not to enter the restricted area, which he ignored, dying in the area.

A young man from the state of Puebla, identified as Efraín LB, died on the afternoon of Sunday, October 6, drowned in the beach area near Villa del Mar, in the port of Veracruz.

On November 2, 2019, two brothers drowned. Although the death was not the result of having gone swimming, they did perish because the authorities allowed their boats to enter the sea, despite the presence of cold front number 8, whose winds and rains did not allow their return.

The 49- and 51-year-old brothers identified as Franco and Jesús left their homes very early in the morning of November 2, but their bodies were rescued until November 4.

By the end of the year, on December 10, 2019, it was reported that the body of a man remained inert at Regatas Beach, located on Avila Camacho Boulevard at the corner of Abasolo, in the Port of Veracruz.

The man was 29 years old and it was confirmed that the cause of death was precisely due to drowning.

In 2020, despite travel and beach visit restrictions , there were six rescues, most in Boca del Río, two in Alvarado and one more in Veracruz.

Although the beaches are federal, by provision of the Federal Maritime Terrestrial Zone (ZOFEMAT), the obligation to establish operations that ensure the safety of tourists and visitors falls on the three levels of government.

Although it is true that the Regulation for the use and exploitation of the Territorial Sea, Navigable Roads, Beaches , Federal Maritime Terrestrial Zone and Land Gained from the Sea, establishes in its Article 5. that:

“The beaches, the federal maritime- terrestrial zone and the land reclaimed from the sea, or any other deposit that is formed with maritime waters, are public property of the Federation “, the truth is that there is state and local jurisdiction to establish the actions that are taken on the occasion of festivities that involve the use of the beaches.

The law establishes that it corresponds to the Secretariat of the Environment and Natural Resources (SEMARNAT) to own, administer, control and monitor these assets.

And it points out that only with the exception of those that are located within the port area, or are used as shipyards, dry docks, docks for naval repair shops, docks, and other facilities referred to in the Law of Navigation and Maritime Commerce; competence corresponds to the Ministry of Communications and Transportation.

Apart from this, the operations fall on the three levels, although as already stated, in most cases of drowning, the local authorities justified the installation of signs as a restrictive measure to enter the sea and the bathers ignored to them.

The Political Constitution of the United Mexican States itself establishes that security actions are the responsibility of federal, state and municipal authorities.

In this regard, Carlos Alberto Vázquez Mora, of the State Council for the Prevention of Accidents, stated that the phenomenon of drowning, being considered a public health problem, has been monitored with special emphasis.

Especially since in the state there are 200 cases of drowning deaths, a figure that is equivalent to 10 percent of the total that occurs throughout the Mexican territory.

However, he justified that the responsibility falls mainly on the population because if “we do not follow the basic measures, that we do not know how to swim, that we are taking and we get into the water, a lot of responsibility remains on us as people.”

The public servant affirmed that the state government does its job of informing about the measures to be taken in beaches and spas “but unfortunately people, even though they are telling them things, do not take this into account, it is very difficult to avoid this type of situation. ”.

He reiterated that the operations are in synergy with the three levels of government, but the measures taken by the municipalities are their responsibility, despite the fact that many have been disapproved by the Executive itself.

After the attack, journalists’ associations from Oaxaca and Veracruz demand security from Murat and AMLO