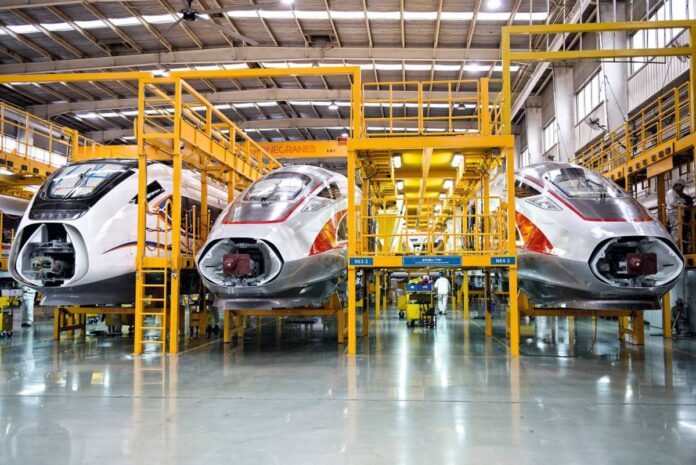 The world’s largest train manufacturer is still defining the location of the plant, but Veracruz and Tampico are some of the options.

Chinese train manufacturer CRRC plans to install a production plant in Mexico with the intention of making the country the focal point for projects the company is already involved in in the Latin American region. The location of the plant, still in definition, points to the north-central area of ​​the country, towards states such as Veracruz and Tampico.

“We intend to set up a 100-hectare plant generating more than 5,000 jobs,” explains Íñigo Pérez Gallego, CRRC spokesperson. “There are several projects in which we are already participating, and we have every intention of supporting Mexico.”

The company is evaluating using patios of around 100 hectares in Veracruz to install the plant, although it is analyzing the installation in Tampico because it has lots there.

Among the projects in which the company is already participating is the modernization of Line 1 in Mexico City, a contract for more than 30,000 million pesos (mp) that the company won at the end of last year. In addition, it is part of the Tijuana-Tecate Interurban Train project, in which around 2,860 million pesos will be invested, and in the supply of 26 wagons for the Metrorrey in Monterrey, for 1,386 million pesos.

CRRC also intended to participate in the bidding for the Maya Train rolling stock. However, they accused of an “uneven floor” in the bidding process, among whose requirements are a national content index of 65%, which the company has asked to lower to 35%, and where it is at a disadvantage in the face of production capacity national of Alstom –which, together with Bombardier, has a plant in Ciudad Sahagún, Hidalgo– and of CAF, which manufactures its trains in Huehuetoca, State of Mexico.

For this reason, the company refrained from sending its proposal before the deadline, on May 7, but promised to reduce the delivery times of the trains by five months and even offered a price 30% below the value of the market for the contract, which includes the construction of 42 trains, among other services.

“We have qualities and capabilities for the project that greatly improve the other proposals,” says Pérez Gallego, referring to the proposals of the consortia led by Alstom – whose offer was 36,563 million pesos – and by CAF, quantified at 37,453 million pesos.

CRRC even sent a letter to President Andrés Manuel López Obrador asking “that participation not be restricted to companies from different countries”, without receiving a response.

“We are awaiting the consideration of the agencies,” said the company spokesperson.

Expansión contacted the National Fund for the Promotion of Tourism (Fonatur) about the possibility of modifying the bases of the call, whose ruling is scheduled for next May 26, but until the publication of this text, it had not received a response.

The company expects to have the location of the plant and its opening date defined in the coming months and did not give an estimated investment amount.