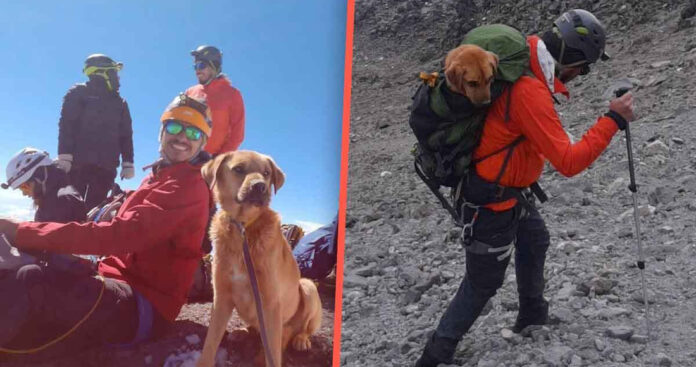 The Creole dog had been stranded at the top of the volcano for almost a month, facing the snow and low temperatures.

Mexico.- An unusual rescue was carried out in Mexico during this weekend, and that is that a group of mountaineers organized to save “Canelo”, a Creole dog that was stranded on the top of Pico de Orizaba .

At the time that “Canelo” was rescued, according to the members of the High Mountain School of the Mexican Alpine Club, he was thin, malnourished, his legs were injured and his eyes were red from the strong solar radiation.

Also, in order to safeguard the life of the puppy, it was given for adoption to an animal protector, who is also a mountaineer, named Fátima del Ángel Palacios.

Days before, Fatima contacted Hilario, who led the rescue, and thanks to his call for help it was like, with the support of a backpack, the animal was able to return to the mainland and now have a new home .

The dog rescue at that height seems easy, but it was not, since, although they gave him food and hydrated Canelo, the puppy had a damaged leg pad and became restless when they put a strap to lower him, which made it difficult to descent and made it dangerous until one of the mountaineers suggested putting it in a backpack to lower it.

“My friend Aarón suggested that we put it in his backpack since it was the largest of all, the others divided their things, and after a lot of work and dodging the bites that he threw at us, we could put it in the backpack, and just his head was sticking out.

The mountaineer tells that he was going to carry Canelo, but two of his friends offered to do it with relays under dangerous conditions of the Pico de Orizaba until they managed to descend with everything and a dog to a shelter, where he was transferred in a truck, where he slept all the way to the mountaineer’s house.

“I was going to carry it to lower it, but my friends Aarón and Héctor Hernández offered to carry it, taking over from what we were getting off … Thank you, CAM friends, without you, I might not have been able to do it. Thus we began the difficult descent due to the conditions of the mountain, in parts crystallized sand, others, very hard snow, and below the already very loose snow that made one fall repeatedly. We got to the shelter without incident… to the vans, it was difficult for us to get it up, but already at the top he lay down (the rescued puppy) and came sleeping ”.

The puppy Canelo thus had one of the best dog rescues, since, after taking him down from Citlaltépetl, a shelter offered to help him find a home and after a couple of days in the house of the mountaineer who would help him down, he went to find a family.